I placed an order with Amazon early this morning. I looked for this item in several stores yesterday, so that I’d have one to show you this morning but couldn’t find any. I decided to order them on Amazon this morning anyway, because this week’s sermon and next week’s are going to be a two-part sermon on the same theme. That theme is how much we human beings remain stuck in the Us-vs-Them Thinking Trap. You’ve heard me talk about Us-vs-Them Thinking a lot in my first year as your pastor. As I complete my first year with you these next two weeks — next week being Reformation Sunday — I want to up the ante a bit with my message that the greatest need for the church today is to revitalize its basic Gospel message. Today and next Sunday, I’m going to say it more bluntly: I think we essentially need a New Reformation because the first one was a failure in at least one very big way. The first Reformation, led by our hero Martin Luther 500 years ago, failed to free us from the Us-vs-Them Thinking Trap. In fact, it ended up simply giving us yet another way to remain trapped in Us-vs-Them Thinking, namely, Protestant vs. Catholic — leading to numerous bloody, deadly, protracted wars over the first couple hundred years upon the birth of Protestantism. One of them was actually called the Thirty Years War. Many of our ancestors fled these wars in coming to America. It’s a big reason why our nation formed valuing religious freedom. What we valued was not starting wars because of religious differences. Our forebears in this nation sought to avoid the violence which religion seems to bring in its wake. I think this continues to be a big reason right now why people are fleeing from our churches.

So we really need to understand the failure of the first Reformation! Over the next two weeks, I hope to make it more clear that a central reason for the failure is remaining stuck in the Us-vs-Them Thinking Trap. 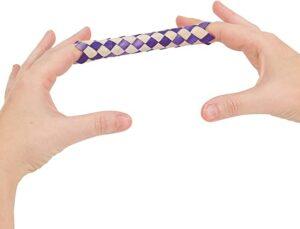 You might still be wondering, ‘So what was that item you ordered early this morning on Amazon?’ This week I can only manage a blown-up picture of one; next week I’ll have plenty of the real thing as an object lesson to remember these sermons by. [Holding up picture.] It’s a Chinese Finger Trap. You’ve probably seen one. Perhaps you’ve gotten stuck in one. When you put a finger in each end, and then try the natural movement of trying to pull your fingers back out, you can’t. You’re stuck. The natural movement of trying to pull your fingers out causes the trap to seize your fingers more tightly. You’re trapped by your own natural movements. The best way out at that point is to have someone else help you. [While demonstrating with hands:] Because what you need to do is have someone else’s fingers surround each end of the trap and pull back with external movement. To simply rely on the internal movement of pulling your own fingers free keeps you stuck.

Let’s begin with the very first line of the parable: “Two men went up to the temple to pray, one a Pharisee and the other a tax collector.” Immediately, Jesus’s first century Jewish audience would have been pulled into Us-vs-Them Thinking. The Pharisees were good, leaders of “Us.” Tax collectors were bad, corrupt and dirty collaborators with “Them,” the Romans. But then Jesus proceeds to blow that expected Us-vs-Them Thinking apart. He shows us a Pharisee who’s not very likeable. He brags about his own accomplishments, while looking down his nose at others. And the hated tax collector? Jesus paints him as someone who might actually be likeable, someone who’s in touch with his own failings and seems to want to change. Whether or not this particular tax collector actually goes beyond confession and takes steps to change, we don’t know. But I don’t think it’s essential to the point of the parable. Which is how easy it is for us to be trapped in Us-vs-Them Thinking. Jesus begins with stock characters with whom to easily draw us into Us-vs-Them Thinking: Pharisee good, one of Us; tax collector bad, one of Them. But then Jesus turns the table on us. He gives us a picture of an unlikeable Pharisee and a likeable tax collector. Now which one is Us and which one Them?

How we answer that question depends on how we translate and interpret the last line of the parable. Jesus concludes, “I tell you, this man[, the tax collector,] went down to his home justified rather than the other[, the Pharisee]; for all who exalt themselves will be humbled, but all who humble themselves will be exalted.” I have a confession to make. I changed the translation of this verse in what we read this morning from the bulletin. I read earlier, “this man went down to his house justified alongside the other.” What I just read now is from all the translations into English: “this man went down to his house justified rather than the other.” Big difference, right? It’s precisely the difference by whether or not we remain trapped in Us-vs-Them Thinking. To say “rather than” is to say that the tax collector is now justified, part of the good guys, and the Pharisee is not. The parable begins with the conventional wisdom: Pharisee good, tax collector bad. And then Jesus seemingly turns the table on us: tax collector good, Pharisee bad.

Or does he? The Greek word behind the two translations, either “rather than” or “alongside,” is the simple preposition para, p-a-r-a.1 We see para used as a preposition in English with words like “paramilitary.” We also see it within crucial words like “parallel.” Notice that in most English words it carries the sense of “alongside.” To be paramilitary is to be part of a group that supplements the main military. To be parallel literally means to be alongside. The chief meaning of the Greek preposition para is alongside.

Does the second part of his conclusion give us a clue? Jesus goes on to say, “for all who exalt themselves will be humbled, but all who humble themselves will be exalted.” Does that help us? It appears to go along with the table-turning interpretation in which the exalted and humble merely trades places. Jesus reverses polarity on us.

But brothers and sister in Christ, there is another possibility. To say that the exalted are humbled and the humbled are exalted doesn’t have to mean simply switching places. My up-hand can be lowered, humbled, to a middle position, and my down-hand can be raised, exalted, also to a middle position. [Show hands moving to a position alongside one another.] Now my hands are what? Alongside each other! So we’re back to the dilemma of how to best translate the preposition para: as “rather than” [show hands in up and down position switching places], or “alongside” [show hands in up and down positions moving to meet in the middle alongside one another]?

Let’s go back to the Chinese Finger trap for a moment to help us decide [holding up picture once again]. How is that you can free yourself from this trap? Not internally. Once your fingers are inside each end, you cannot pull them free. You have to have someone else use their fingers to apply external pressure from each end to get free.

Brothers and sisters in Christ, that’s what God does in Jesus the Messiah to free us from our Us-vs-Them Thinking Trap. He sends Jesus as the outsider in the sense as one sent by God. But even that wasn’t going to be enough to free us. Jesus has to, in the end, let himself be treating as one of Them, the actual bad guys. He has to let himself be put on trial and declared a criminal — a blasphemer to the Jews and an insurrectionist to the Romans. He has to let himself be pushed outside the city and executed horribly on a cross. And then the real external move comes on Easter morning with God raising him from the dead, putting to shame our human justice system as something trapped in Us-vs-Them Thinking. If Jesus and God his Father were themselves trapped in Us-vs-Them Thinking, Jesus would come back as revenge. Instead, Jesus is raised as the Forgiving Victim of the violence wrought by our Us-vs-Them Thinking. “Peace,” says Jesus to his disciples on Easter evening; “I want to enlist you in the business not of revenge, but of forgiveness.” It’s only God’s loving forgiveness which begins to free us from the Us-vs-Them Thinking Trap. Amen. . . . and Part 2 next week (Reformation Sunday).

1. I owe this insight to scholar Amy-Jill Levine, first in the commentary on Luke she wrote with Ben Witherington III (New Cambridge Bible Commentary, 2018), pp. 494-95; and then, in her iconoclastic book on the parables, Short Stories by Jesus, in which Levine devotes a major chapter to this parable, chapter 6, pp. 169-195.