Girardian Lectionary > Reflections > Year C > Proper 11C Sermon (2013)
Proper 11 (July 17-23)
Texts: Col. 1:15-20;
Luke 10:38-42
CHANGE AGENTS FOR RECONCILIATION
Mary and Martha believed Jesus to be the Messiah, the Christ, the one through whom God was bringing peace into the world. Martha chose to serve this person of God’s power — not a bad choice since he was a Messiah who came to serve us, by dying on the cross to reconcile us with God and one another. Mary chose to sit and listen. Why was this “the better part”? Because the cross hadn’t happened yet, and so it was important to hear from Jesus how he came to bring peace into the world. At that time and place — and in most times and places yet today — peace is won in a very different way than the one God chose. For us human beings the only way to peace we’ve really known has been by having a bigger and better army, by having the power to force your way onto another group of people. Jesus comes from God with a completely different way to peace: one that submits to our human power of force in order to forgive it and to offer us instead the power of forgiveness and love. Jesus would later show Mary and Martha this way of peace in the cross and resurrection. Mary chose the better part at that moment, of listening to this one who was bringing God’s unique and world-changing Way of peace.
Our reading from Colossians is a treasure, an early Christian hymn that expresses this world-changing power of God to pioneer a new way of reconciliation in this world. It proclaims faith in Jesus’s Way of Peace as superior to that of any other power and authority in the world. I have a video to share with you this morning that does a great job of bringing this out.
But first, a couple questions: Unlike Mary and Martha, now that we know about this new way of peace, you and I are called to be agents of change in this world. Where can we bring God’s power of reconciliation? God knows this world needs it, right? Look at our politics — completely polarized and gridlocked. How can you and I be agents of reconciliation as citizens of this great but struggling nation? The aftermath of the George Zimmerman trial reveals once again two Americas, racially divided. How can you and I be agents of reconciliation between the races?
This video presentation by Brain McLaren gives us the scope of our reading from Colossians. But we first pick it up as he is talking about another disciple, Peter, who like Mary and Martha believed that Jesus was the Messiah but didn’t understand yet what that means.
Start video at the 42:18 mark: Brian McLaren, “The Historical Jesus: What You Focus on Determines What You Miss,” a presentation at a conference hosted by Richard Rohr’s Center for Action and Contemplation, and available on DVD titled Emerging Church: Christians Creating and New World Together (see the CAC store for more info). Focusing primarily on Matthew 16, he concludes with reflections on Col. 1:15-20. Here are my notes: 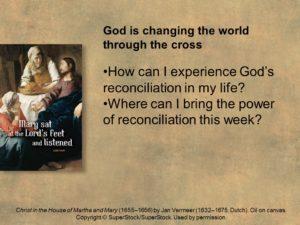