THE ADVOCATE IS STILL TEACHING — ARE WE LISTENING?

…the Advocate, the Holy Spirit, whom the Father will send in my name, will teach you everything, and remind you of all that I have said to you. (John 14:26)

Has the Advocate, the Holy Spirit, finished its job yet? Have we learned all that we need to know from Jesus yet? Would it still help to be reminded of anything Jesus said?

If you’ve gotten a feel for my preaching these first couple months, you know I answer these questions, “Yes, we still have much to learn.” You’ve heard me give the example of how Lutherans in general, and in Nazi Germany in particular, did not take seriously what Jesus said in the Sermon on the Mount. Instead, a Hindu man, Mahatma Gandhi, took Jesus’ words seriously, and Christians have taken notice, beginning with Dietrich Bonhoeffer in opposing the Nazis. I think that’s a prime illustration of the Advocate, the Holy Spirit, continuing to do its work.

In our Sunday morning class we’ve been trying to look at the big picture of where the church is at. Why are so many churches in danger of closing their doors? What’s happening? These are very important questions to consider as you look to call your next pastor. Will she or he lead this congregation forward in the face of such challenges? Or will the next pastor basically be a chaplain to give you comfort on the way to closing your doors in five years? It’s not easy to be so blunt with you, but I think this is the ideal time to be realistic about the challenges facing us all.

And the key to such a tall task, I believe, is to listen to the Holy Spirit afresh. What does the Spirit still have to teach us about the salvation Jesus came to bring? I can even venture an answer with you today. This: what we need is an age of spiritual awakening, as opposed to mere religious reform. Have you heard folks these days say something like, “I’m a spiritual person, but not religious”? I believe it not only expresses a trend for human spirituality. I believe it’s one of the new things the Holy Spirit has been trying to show us that we finally — two thousand years later! — are beginning to listen to.

Jesus did not come to start a new religion. We already had enough religions, and they tended to lead us into more division and violence, not less. We are finally getting the message on that! Jesus came to lead us into a new spiritual relationship that brings the end of religion. And when I say “end,” I mean both its senses, especially meaning the goal of religion. What God has been trying to help us into as human beings for all these eons of time is to be one human family, so that we can properly take care of Creation. We can’t fulfill our role as stewards of the Earth if we are fighting with each other all the time. And religion evolved in a sinful way that actually gets in the way of that goal. Jesus came to fulfill God’s goal for human beings by bringing the ‘end’, the goal, of religion. He came not to start a new religion as much as, at the very least, to redeem all our religions — leading us into unity, instead of further division.

I think one of the places we see this the most is in the letters of St. Paul, where he is arguing against having to convert Gentiles into Jews, or Jews into Christians. [Powerpoint slide that shows the following translations.] In the great Reformation text of Romans 3, Paul says, “For we hold that a person is justified by faith apart from works prescribed by the law.” (Rom 3:28) I think we could translate this verse as, “For we hold that a person is saved by a spiritual relationship apart from religious practices.” What Paul means by the word translated as “faith” is very much like what we are talking about today when we try to focus more on a spiritual relationship with God and others. And when Paul says “law” he has in mind the Torah which is precisely the Hebrew name for practicing religion. In short, I think Paul is actually talking about what we are hearing today as a spiritual awakening that goes beyond traditional religious practices — practices that keep dividing us instead of bringing us together.

One of the most important books for church people who care about happens in the next ten years is Diana Butler Bass’s Christianity After Religion: The End of Church and the Birth of a New Spiritual Awakening. In her chapter on the contemporary turn from “religious” to “spiritual” she cites a story involving . . . Saginaw, MI:

Not long ago, a Presbyterian minister drove me through the streets of Saginaw, Michigan, once a manufacturing center for the automotive industry, especially General Motors. Facing crisis and collapse, General Motors pulled out of the town. Deserted factories now line wide commercial boulevards; empty churches and abandoned houses checker once middle-class neighborhoods. “I don’t know what we can do,” the pastor said. “How do you turn all this around? What use is there for all these empty plants?” At one time, it was a thriving city. But dependent on the old model, Saginaw is half the size it was in 1960, left in a state of postindustrial decline. “I can’t even say that young people should move here,” she said. “There’s nothing here to do. Everything has ended.” Clearly articulated or not, even religious leaders know that the old church institutions are unsustainable and are failing.

Butler Bass goes on to compare cities that are declining to the decline of the church. Just as we need to turn to new economic bases in former industrialized cities, we need to turn to a new spiritual base in the church. Yes, this means change, change to meet the changes which are already happening in this era of great change. And I propose that many of the most important changes are being brought about precisely by the Advocate, the Holy Spirit of Truth. 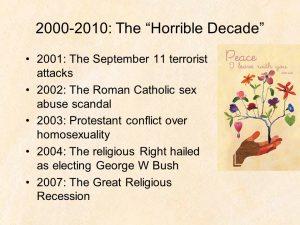 The ‘conversion’ of people self-identifying as “spiritual” rather than, or in addition to, “religious” accelerated in the decade 2000-2010. Butler Bass suggests some events in the news over those years which might help account for the dramatic change. [extemporize comments explaining the slide]

In any case, here’s the data on the conversion: [extemporize explanation of the slide — of how the middle two categories dramatically switched in numbers over ten years] 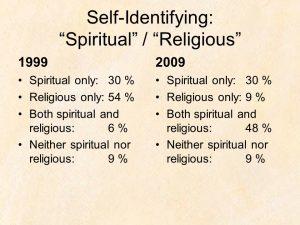 To live into being “spiritual” more than “religious” calls for a significant change that we can’t begin to outline here today. I promise to unpack this little-by-little in my time here as your Interim Pastor. So let’s finish this morning by simply acknowledging the weightiness of facing any time of significant change. Is the church ready for the good changes that the Holy Spirit is bringing us? Is Faith Lutheran in Saginaw ready? Remember the change ten years ago, when you had an aging building that was increasingly difficult to maintain. You made the bold and wise decision to sell it and move to and build a new more manageable facility. A big change, right? Can you make some big changes again in order to grow this ministry?

Finally, there is the context of our Gospel Reading itself. It is the Last Supper, the night before Jesus’ self-sacrifice on the cross, and the beginning of his rising to a new resurrection life with God the Father. Jesus gives them assurance of a Helper, an Advocate, the Holy Spirit of Truth. He was anticipating a time of huge change for them and encouraging them in being able to see it through. I leave you this morning with the same concluding words from Jesus,

And now I have told you this before it occurs, so that when it does occur, you may believe. (John 14:29)