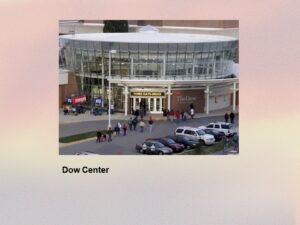 Imagine that you are walking downtown in Saginaw and wander into the wide-open doors of the Dow Center. There’s a big celebration of some sort going on in the ballroom, but there are no signs, no hints, of what it might be about. There’s also no obvious security at the doors, and you are simply able to walk right in. A waiter hands you a drink. Strange. It’s a big celebration alright, but you have no idea what it’s for. 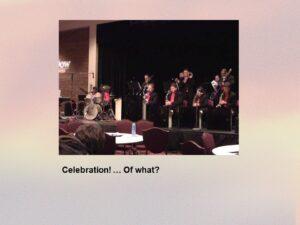 That’s kind of like what our Second Lesson gives us this morning. We walk in on a celebration, but we don’t know what it’s for. There’s angels and elders and all myriad of creatures praising God and the Lamb slain, but we missed the prior action which gives the cause for celebration. 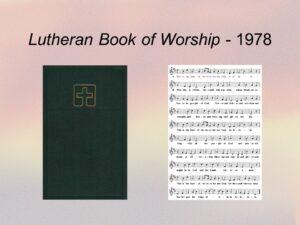 I suspect that they give us this four verse slice because this scene has become part of our Sunday liturgies. The Green Hymnal (Lutheran Book of Worship) came on the scene almost 40 years ago. But, then, this is the time when we might ask the same thing about our liturgy: does the stranger who walks into our worship have an idea of why we are celebrating? For those of us who are here each week, how would you answer that? What is our celebration all about?

I think that the verses just before our Second Lesson give about as good of an answer as any to that question . The setting is the throne room of God, and the drama involves a scroll with seven seals in the hand of God. Presumably, the scroll contains God’s plan for setting things right in creation and saving its creature from the powers of sin and death. Who is worthy to open such a scroll? 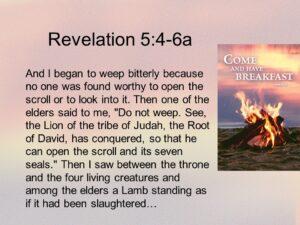 The answer to that question, and the pivotal point of the entire drama of Revelation is in verses 5-6. One of the elders tells John to look up for the Lion of Judah, the symbol of a mighty Jewish conqueror. But instead John sees a Lamb standing as if it had been slaughtered. This is the very crux of the matter. We human beings always expect a savior who is mighty in our terms. If an enemy is inflicting hurt on us, we expect our savior to be able to inflict an even bigger hurt on them. The lion is the top of the food chain, and so is a fitting symbol for our expected savior.

But God’s ways clearly aren’t our ways. Who is worthy to open the scroll of God’s plan of salvation? The Lamb slaughtered. Jesus the Messiah who took our brokenness upon himself.

This passage carries a great message of comfort to the broken. In all our brokenness, we are never too damaged for God to use us. During Eastertide, when we redefine what it means to “win,” this is another crucial passage that reminds us how the cross has changed our understanding of victory and salvation. Victory is not reserved for those who do the wounding, or those who manage to escape being wounded. Victory is given to the wounded, leading us to learn that our own physical power or our triumph over others that we win anything. Only in God are we made worthy. Recognizing the worthiness of the Lamb slain, we find our own path to worthiness. Insecure, self-doubting human beings cannot hear that message too many times. 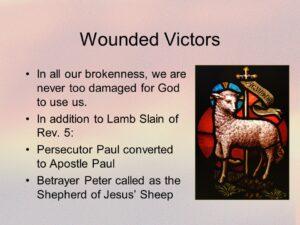 In fact, we hear it three times this morning. St. Paul’s conversion story is one of just such a turn-around. Paul, or Saul as he was still called, thought he was winning great victories for God by persecuting these new Christians. But the Lamb slain confronts him on the rode to Damascus: “Saul, Saul, why do you persecute me?” And so it is in his brokenness precisely as a sinner, as one who wounded others, that he recognizes himself as wounded and comes to know God’s unconditional love for him as the power in this world that can truly change or save us.

Peter’s act of wounding another, his act of betrayal by denying Jesus three times, was from the beginning also a self-wounding. Peter weeps bitterly when the cock crowing signals his denial of Jesus around the charcoal fire of the high priest’s courtyard. But weeks later he is around a charcoal fire by the Sea of Galilee with Jesus, and he is given the opportunity to affirm his love for Jesus three times. His act of betrayal is undone, forgiven. His Lord had taken that wounding upon himself and turned it into something good, something healing. 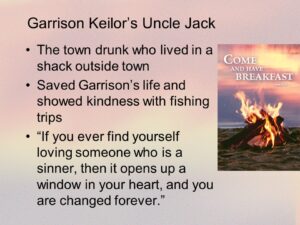 I’m a fan of NPR’s Garrison Keilor — using a story of his last month about Pastor Enqvist losing a trip to Orlando. I’ve also been able to see him in person, where he simply tells stories for a couple hours. there was also an opportunity to hear about this same amazing grace. Among the many stories Keilor told — he told stories and recited poetry non-stop for almost two hours — he told several stories about his Uncle Jack, who had at one point in his life taken a dramatic turn into being the town drunk in Lake Wobegon, Minnesota. As Keilor put it, ‘The position had come open and Uncle Jack filled it.’ He became the one whom all Keilor’s friends and family ostracized, the one the rest of us can feel better about ourselves because we’re not like him. Even Keilor’s aunt had thrown Uncle Jack out, so that he spent a good deal of his time going back between the bars and a shack he lived in, in the woods outside of town.

But it was those same woods that Keilor himself had gotten lost in. He was about 14 and on a January camping trip with his local Boy Scouts troop. He had gotten up in the middle of the night to go pee, and being from modest stock he wondered too far away from their tent. On a bitterly cold winter night in Minnesota, he couldn’t find his way back. That’s when Uncle Jack happened to wander along on his way back to his shack and probably saved Keilor’s life.

Years earlier it was also this same Uncle Jack who had taken the time on several occasions to take his nephew fishing. Keilor could still recall all the wonderful sights and sounds and especially smells of those fishing trips. It was truly an act of kindness to a young boy that he would always cherish. And so it was that Keilor had come to love his Uncle Jack, the one who others came to ostracize. And in the midst of two hours of story telling, Keilor happened to sum up the Easter victory like this: “If you ever find yourself loving someone who is a sinner,” he said, “then it opens up a window in your heart, and you are changed forever.”

St. Paul, the sinner, the persecutor of Christians, whom Jesus had loved unconditionally, put it like this:

But God proves his love for us in that while we still were sinners Christ died for us. 9 Much more surely then, now that we have been justified by his blood, will we be saved through him from the wrath of God. 10 For if while we were enemies, we were reconciled to God through the death of his Son, much more surely, having been reconciled, will we be saved by his life. (Romans 5:8-10) 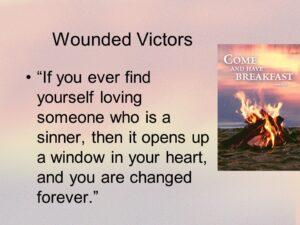 In other words, the most important sinners we come to know and love through the Gospel is ourselves. In the words of Garrison Keilor once more: “If you ever find yourself loving someone who is a sinner, then it opens up a window in your heart, and you are changed forever.” That’s what we celebrate here each week. So let’s continue the party. Everyone is invited! Amen