When the crowd saw that neither Jesus nor his disciples were there, they themselves got into the boats and came to Capernaum looking for Jesus.

25When they found him beside the sea, they said to him, “Rabbi, when did you come here?”

26This was Jesus’s reply.

“I’m telling you the solemn truth,” he said. “You aren’t looking for me because you saw signs, but because you ate as much bread as you could. 27You shouldn’t be working for perishable food, but for food that will last to the life of God’s coming age — the food which the son of man will give you, the person whom God the father has stamped with the seal of his approval.”

28“What should we be doing,” they asked him, “so that we can be doing the work God wants?”

29“This is the work God wants of you,” replied Jesus, “that you believe in the one he sent.”

30“Well, then,” they said to him, “what sign are you going to do, so that we can see it and believe you? What work are you doing? 31Our ancestors ate the manna in the wilderness; it says in the Bible that ‘he gave them bread from heaven to eat.’”

The New Testament was written in Greek and the phrase in Greek is zōē aiōnios. Zōē straightforwardly means “life”; we use it in English for words like “zoology.” The word aiōnios is trickier. In Greek philosophy it came to have the sense of “eternal.” But we also get our English word “eon” from it, having more the meaning of an “era in history,” a long period of time, an “age” — such as the Jurassic Age.

And the factor that complicates this even more is that, even though Jesus probably knew and spoke Greek, his first language was Aramaic, a dialect related to Hebrew, which is the language in which the Old Testament is written. So what phrase were they trying translate out of Aramaic/Hebrew? And why might that be important in this case?

N.T. Wright, Anglican Bishop and Professor at St. Andrew’s in Scotland, is recognized as one of the foremost New Testament scholars of our time. “Life of God’s coming age” is his translation of zōē aiōnios. Here’s his explanation, commenting first on the English translation “eternal life”:

There we are, think average Christian readers. “Eternal life” is the biblical promise of a timeless heavenly bliss. But it isn’t. In the many places where the phrase zoe aionios appears in the gospels, and in Paul’s letters for that matter, it refers to one aspect of an ancient Jewish belief about how time was divided up. In this viewpoint, there were two “aions” (we sometimes use the word “eon” in that sense): the “Present age,” ha-olam hazeh in Hebrew, and the “age to come,” ha-olam ha-ba. The “age to come,” many ancient Jews believed, would arrive one day to bring God’s justice, peace, and healing to the world as it groaned and toiled within the “present age.” . . . In other words, Jesus has inaugurated, ushered in, the “age to come.” But there is no sense that this “age to come” is “eternal” in the sense of being outside space, time, and matter. Far from it. The ancient Jews were creational monotheists. For them, God’s great future purpose was not to rescue people out of the world, but to rescue the world itself, people included, from its present state of corruption and decay. If we reframe our thinking within this setting, the phrase zoe aionios will refer to “the life of the age,” in other words, “the life of the age to come.” (N.T. Wright, How God Became King, p. 44)

Jewish views of salvation involve different ‘ages’ in history, and that the Christian version builds on it, seeing Easter as the beginning of God’s new age. But the present age of powers disobedient to God continues for a time, so the two ages now overlap. We live in the in-between times of overlap, seeking obedience to God by following Jesus as disciples. Our “work” is trusting the One God sent (v. 29). 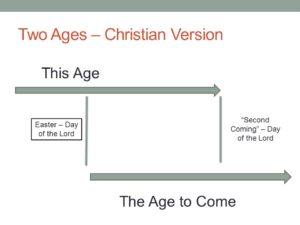