LOGOS OF POLEMOS — LOGOS OF AGAPE-LOVE 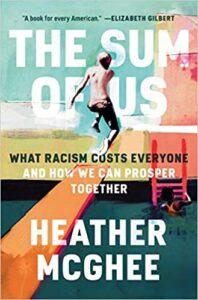 But recently I also learned the rest of the story about suburban swim clubs in the 1960s. On the cover of Heather McGhee’s new book, The Sum of Us: How Racism Costs Everyone and How We Can Prosper Together, is a young boy jumping off a diving board into a pool. Chapter Two is titled “Racism Drained the Pool.” You see, the background to the private swim clubs of 60s are public swimming pools of the previous era. McGhee explains,

In the 1920s, towns and cities tried to outdo one another by building the most elaborate pools; in the 1930s, the Works Progress Administration put people to work building hundreds more. By World War II, the country’s two thousand pools were glittering symbols of a new commitment by local officials to the quality of life of their residents. . . . (23)

But then racism intervened:

IN 1953, A thirteen-year-old Black boy named Tommy Cummings drowned in Baltimore’s Patapsco River while swimming with three friends, two white and one Black. The friends had been forced to swim in the dangerous waterway because none of the city’s seven public pools allowed interracial swimming. Tommy was one of three Black children to die that summer in open water, and the NAACP sued the city. It won on appeal three years later, and on June 23, 1956, for the first time, all Baltimore children had the chance to swim with other children, regardless of skin color. (23-24)

Here’s what happened: Many white people stopped coming to the pools, and the white people in charge of the public pools began to drain them. All across America public swimming pools increasingly fell into disuse, were drained and eventually filled it. In their place popped up private swim clubs whose membership could be controlled. That’s the rest of the story on my resentment of our family not being able to afford joining Fairway Farms Swim Club in the late 60s. Racism had drained the public pools that everyone could enjoy. Now, my resentment seems rather petty (another sign of how my white privilege has kept me ignorant of how racism costs everyone). Not being able to afford a swim club is but the tip of the iceberg of how racism costs all of us in quality of life if we worked together to help everyone prosper. McGhee in The Sum of Us considers all the major issues involving quality of life one-by-one — affordable health care, housing, education, infrastructure, good-paying jobs — and one-by-one she shows how racism intervenes to hinder quality of life for everyone except the most wealthy.

You may be asking yourself: isn’t this politics? Well, yes. But I’d like to propose to you this morning that the Gospel is very much about politics, politics that lead to better quality of life. That’s the point, for example, of our celebrating Good Shepherd Sunday three weeks ago. Jesus says point blank to the leaders of his day, “I came that [the sheep] may have life, and have it abundantly. I am the Good Shepherd. . . .” (John 10:10b-11a) The implication is that they have been bad shepherds, failing to help the average person to prosper, to have better quality of life. And in the end what did they do to him? Put him on trial and execute him on the cross. Messiah, or Christ, is a thoroughly political title. At the end of every church year we celebrate Christ the King Sunday. But over the centuries we have blunted the political nature of the Good News by making it to be mostly about life-after-death, instead of life here and now.

Brothers and sisters in Christ, what if this Good News really were Good News for life here and now and not just someday after we die? Do you think more people today would find that relevant to their lives? As our church communities continue to shrink, do you think it might have something to do with our basic message? What if more-and-more people are dissatisfied with a message that is mostly about the after-life and not so much about our quality of life here today? And what if Jesus came with a message from God that actually did have everything to do with what makes for quality of life that begins with our hearing it and trusting it?

I would like to take a few moments this morning considering that latter option. During this Easter season we have received a double-dose of John: our Second Readings have been from the letters of John, and our Gospel Readings have been mostly from the Gospel of John [one from Luke]. And I believe that John’s message to us is precisely about how powers like racism which diminish the quality of life in the world — in his day it was the ethnic imperialism of the Roman Empire — and that Jesus came to save us from such powers. When John talks about “eternal life,” he is talking about how Jesus came to make life better for everyone — starting today, if you trust the way of love he brings into the world.

We’ve already mentioned how Jesus the Good Shepherd came to bring abundant life to potentially everyone who will accept it. It’s helpful to remind ourselves how John’s Gospel begins, how it is that he frames his entire message:

The Word is all about life . . . for all people. And you and I are called to be witnesses to this Word of life. We are called to live into it by loving others as Jesus loved us. We are called to abide in that kind of love — the love God has for the world such that God sent the Son into the world to save it, not to condemn it.

Having reminded ourselves about the big picture of John’s message, that it is about the Word by which the world came into being, the Word that brings life for all people, we also need to understand how the world rejected God’s Word of life. John was very intentional when he began his Gospel talking about the Word, with a capital W. In the original Greek the word for Word with a capital W is Logos, from which we get our English word logic, or logistics, or all those -logy endings to words such as theology, biology, anthropology, etc. And here’s the crucial thing to know: in the Greco-Roman culture of John’s day there was a famous philosophy about the Logos as meaning an organizing principle for the world. The philosopher Heraclitus had named the Logos as polemos, the Greek word for conflict, division, or war. The Logos, he said, the organizing principle for the world, is polemos, conflict, war — in short, not just death, but killing others. That’s what empires do to everyone who’s not one of Us and who gets in their way. The Logos of polemos is the background to John beginning his Gospel by proclaiming a very different Logos, a Logos that creates life, a Logos based on loving the world, even though the world rejects it.

This is why Jesus prays for his disciples protection in this morning’s Gospel. He prays for us, his followers, because we do not belong to a world organized around polemos, but we are sent into it to bear witness to another Logos, another organizing principle. We are called to witness to the power of life that comes through a love that lays down its life for others.

In our day, the chief example of a Logos of polemos, an organizing principle based on conflict and division, is racism. As followers of Jesus, we are called to understand how we do not belong to a world organized around the polemos of racism. We are called to stand for an organizing principle of love — not a sentimentalizing love that’s just about good feelings, but the agape-love that Jesus brings us from God which leads to more abundant life for all people. A Logos of agape-love instead of a Logos of racist-polemos. Do you think that there are family, friends, neighbors, fellow-citizens who would sign-up for an organizing principle of love? For working together to help everyone prosper? For healing the Us-vs-Them which currently plagues us in favor of a Logos that brings about the Sum of Us? Jesus prays that we may be one as he and the Father are one. Let’s pray ourselves into action that makes that love happen, here and now. What has come into being . . . was life, and the life was the light of all people. Amen