CHOOSING THE PATH OF CARING FOR THE LEAST
. . . BEFORE TIME RUNS OUT

The Urgent Matter of Time Running Out
In this parable, time runs out. The bridegroom arrives and five of the bridesmaids aren’t ready. They suffer the consequences of time running out.

That happens often in real life, doesn’t it? Most of the time the consequences are rather benign. Time runs out, we aren’t quite ready, and we are able to move on reasonably unscathed. But sometimes the consequences are greater and even cause damage or harm. Perhaps you miss too many important deadlines at work and it costs you your job. Maybe you’ve not been listening to your doctor’s warnings about continuing in unhealthy behavior until it reaches a turning point of suffering consequences. You run out of time and there’s lasting consequences. You wish you had acted with greater urgency.

Understanding Prophecy: Time Running-Out with Consequences
Time running out is a feature of understanding prophecy in the Bible. Often times the word prophecy is confused with fortune-telling in the sense of seeing future events. Prophecy, especially in the Bible, is NOT fortune-telling. Fortune-telling means that you actually see a future event that locks those involved into a certain fate. Prophecy is something more gracious than that. Prophecy is seeing where a path leads to in order that one might still choose a different path. 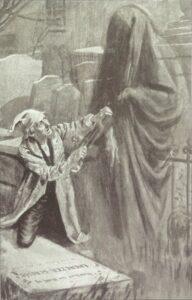 My favorite example of this is Charles Dickens’ A Christmas Carol. The ghosts of Christmas Past, Present, and Future visit Ebenezer Scrooge in order to show him the path he’s been on in his life and where it is taking him. The purpose of that is NOT to show him a fate that he’s locked into, but to give him a chance to choose a different path before it’s too late — before time runs out. As Scrooge kneels over his gravestone with the ghost of Christmas Future, he ask for clarity on precisely this point:

“Are these the shadows of the things that Will be, or are they shadows of things that May be, only? Men’s courses will foreshadow certain ends, to which, if persevered in, they must lead,” said Scrooge. “But if the courses be departed from, the ends will change. Say it is thus with what you show me!” . . . “Spirit!” he cried, tight clutching at its robe, “hear me! I am not the man I was. I will not be the man I must have been but for this intercourse. Why show me this, if I am past all hope! . . . Assure me that I yet may change these shadows you have shown me, by an altered life!”

To his credit, Ebenezer Scrooge chooses another course in life and radically alters his life. He acts to change the consequences of his actions before time runs out.

This is what the tradition of Hebrew prophets sought to do. They prophesied about the path that Israel was headed on in order to prompt them to change paths before time runs out and they suffer the consequences.

But that brings up the second thing to understand about Hebrew prophecy: it was always about the possible fate of the nation, not just individuals.

Jesus as a Hebrew Prophet
The Parable of Wise and Foolish Bridesmaids is a parable that comes between two prophecies. Matthew 24, the previous chapter, begins with Jesus and his disciples standing outside the temple complex in Jerusalem and the disciples admiring it. Jesus prophesies, “You see all these, do you not? Truly I tell you, not one stone will be left here upon another; all will be thrown down” (Matt 24:2). Jesus sees that his nation is on the wrong path that God has chosen for them. Instead of following their call to heal the divisions between the peoples of the earth, they are on the path of further dividing the nations. They are on a path that will lead to armed rebellion against Rome and will suffer terrible consequences unless they choose the path that God had planned for them in sending Jesus as the Messiah. Time will also run out at a certain point and it will become too late.

Jesus spoke these words of prophecy about the Temple in around the year 30. Thirty-five years later the Jewish nation had continued on that path until they found themselves at war with Rome. It waged on for about five years until Rome utterly crushed them in the year 70, demolishing the Temple and most of Jerusalem in the process. They did not choose the path of following Jesus, and time eventually ran out, with major consequences. Their Temple and Holy City, the heart of their religion, were gone; and their way of life was forever altered.

In the aftermath, the Jewish followers of Jesus began a movement which they simply called the Way, or the Path (see Acts 9:2; 18:25, 26; 19:9, 23; 22:4; 24:14, 22). Jesus represented another way of being human which was about healing divisions instead of furthering them. It was about a nonviolent way of standing for healing and unity as an alternative to the sinful human ways of violent divisiveness.

I said that this parable stands between two of Jesus’ prophecies. The first is Matthew 24, about the more immediate consequences of Jesus’ own people choosing the path of war. The second comes at the end of Matthew 25, which is sometimes called the Parable of the Sheep and Goats, but which more accurately should be called the Judgment of the Nations. It is a prophecy about the measure God has established since the “foundation of the world,” which is about to be fully revealed in the coming of the Son of Man as prophesied in Daniel 7. Jesus himself is the fulfillment of that prophecy, as he is about to proclaim to the High Priest at his trial — which directly comes next in Matt 26 (v. 64).

What is that criteria for judging nations? Even those who’ve never read the Bible know the words, “I was hungry and you gave me to eat. . . . Truly I tell you, just as you did it to one of the least of these who are members of my family, you did it to me.” In short, the measure for the path of success for nations is how well they take care of the least among them — the poor, the sick, the immigrant, the imprisoned. Nations that fail at caring for the least are nations who eventually fail to survive their own violent divisiveness. That’s the prophecy for which Jesus is most famous. And today’s parable is meant to underscore that time does run out. Sooner or later there are consequences for the paths we choose.

Discipleship as Living the Way of Healing Our Divisiveness
It has been a privilege to be your Bridge Pastor these past three months. As I shared in my newsletter column this week, I hope I was at least able, over this short time, to plant some seeds through my preaching. I truly believe that the biggest reason for shrinking numbers in the church is because our basic message needs revitalizing.

Over recent centuries, our message became too oriented to the afterlife. Our sense of urgency was tragically misplaced to help people avoid God’s violent punishment in hell. “Time will run out on your life and God will punish you for an eternity,” became our central message.

Brothers and sisters, I believe this is completely off-track. Jesus didn’t come to save us from a violent God. Quite the contrary, a nonviolent, loving God sent Jesus to save us from our violence. The urgency with which we need to make decisions involves the violent consequences of the paths we so often choose as nations. A politics and economics of the rich getting richer and the poor getting poorer leads not only to failure but eventually to a violent ending. Again, this parable looks ahead to the end of Matthew in which we see the prophetic path of choosing to care for the least of Jesus’ family — the poor, the sick, the immigrant, and the prisoner.

We just had one of those urgent decisions this past week as we went to vote for leaders who can lead us onto the right track. We are called to choose the path of Jesus to bring healing to the nations. We are called to guide people onto the Way of caring for the least among us. It includes the choices we are blessed to be make in a democratic nation — unless we run out of time and make choices that kill our democracy. I think we truly need to listen to the prophecy of Jesus right now in order to sort through the most vital issues before time runs out — before COVID-19 runs completely wild; before we reach a no-turning-back point with the climate crisis; before the growing chasm between rich and poor reaches a boiling point of violence; before we lose another poignant moment to finally make great strides forward with racial equality; before we lose our democracy to authoritarian dictatorship. Let’s revitalize our Gospel message as the Way of peace to help heal our broken world. If we get back on track with that Good News, perhaps we will find people coming back to join us in walking that Way of peace. We can find ourselves among the wise carrying lamps to light the Way of peace. Amen.