In Last Week’s Episode. . . .
Last week I began with the 1960’s TV series of Star Trek. This week another 60’s TV show: Remember Batman with Adam West? It was unusual for basically taking a one-hour drama and splitting into two half-hour episodes on Wednesday-Thursday nights. Wednesday would end with, “Tune in tomorrow at the same Bat-time and same Bat-channel.” Then, Thursday night began with a recap: ‘In last night’s episode, our hero and his sidekick. . . .’

The last two weeks is one of unusual times in the lectionary where they split one story into two parts over two Sundays. So we can begin today’s Act 2 with our own version of a recap: ‘In last week’s episode. . . . We saw our hero take his sidekicks to Caesarea Philippi, a highly-charged political spot, and ask them a highly politically-charged question about the “Son of Man,” a Jewish title for their hoped-for political hero. After a few minutes of dimness on the part of the disciples, being slow on the up-take, Peter finally gets the right answer: Jesus is the Messiah, their long-awaited superhero who’s come to save them from the bad guys.’

Well, we didn’t exactly put things in those terms last week, but the superhero shtick is not that far off. The Jewish people were tired of being everyone else’s political doormats. They longed for a time more like King David’s reign, when they had ruled themselves and that part of the world. The latest ruling-power, the Romans, were the biggest and baddest of all. It would take a superhero to defeat them. It would take someone with god-like powers — someone backed by God . . . like the Messiah

Last week, instead of the superhero theme, we used current events, namely, suggesting that this drama in Caesarea Philippi was like a nominating convention. Jesus wants to hear his disciples nominate him as Messiah, the liberating king. Peter does so. So this week we hear Jesus’ acceptance speech where he lays out his politics, his way of defeating the evil powers of empires.

Now on to This Week’s Episode, Where Jesus Shocks Us with His Politics. . . .
So here’s the beginning of Jesus’ acceptance speech: “that he must go to Jerusalem and undergo great suffering at the hands of the elders and chief priests and scribes, and be killed, and on the third day be raised.”

Peter thinks, “Say what? That’s your platform, Jesus? That’s your politics? Suffer the violence of our enemies? What sense does that make?” We know what Peter is thinking because Matthew tells us his reaction. He is so bewildered by Jesus’ politics that he, the disciple, rebukes Jesus, the teacher. Matthew tells us part of the conversation, “God forbid it, Lord! This must never happen to you.” We might imagine him saying something like this, too: “Remember, you just said I’m right, Jesus, that you are the Messiah. That means you make our enemies suffer for what they’ve done to us — not that you suffer at their hands! How could that be?! God forbid it!”

Jesus rebukes Peter right back, “Get behind me, Satan! You are a stumbling block to me; for you are setting your mind not on divine things but on human things.” A better translation of that last bit would be, “for you are thinking not as God thinks but as human beings do.”

That’s the crux of the matter. Our thinking about politics are completely different than God’s thinking. That’s why Paul — in his politics of how to live together in Romans 12-13 — begins by telling us that we must “be transformed by the renewing of your minds, so that you may discern what is the will of God.” Our thinking needs to be transformed. Notice, too, that Paul begins his outline of Jesus-politics in the same place as Jesus. We read Paul’s opening line last week: “I appeal to you therefore, brothers and sisters, by the mercies of God, to present your bodies as a living sacrifice.” Living sacrifice. I believe this is Paul’s version of suffering violence, of taking up our crosses, of being willing to lose our lives for the sake of the world.

I think it would be helpful to chart out the startling, unimaginable differences between our typical human way of thinking about politics and God’s way of thinking: 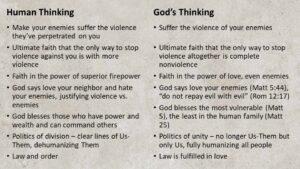 It is important to see the interconnection of these politics with theology. Behind a politics of division is a theology of God favoring the rich and powerful who get to call the shots about what constitutes law and order. They use that theology to justify staying in power. Behind the shocking politics of suffering violence, on the other hand, is a very different theology, a God who favors the most vulnerable rather than the powerful. It’s like Martin Luther King put it, “None of us are truly free until we are all free. None of us truly has enough until everyone has enough.” This can only happen when we prioritize caring for the most vulnerable.

Is This What Jesus Teaches?
Once we move through our shock at a politics of suffering violence, we might ask, “Is this really what Jesus teaches?” We’ve already mentioned [in the table] the beginning and end of Jesus’ teaching in Matthew: the Sermon on the Mount (Beatitudes, “turn the other cheek,” “love your enemies”) and Matthew 25 (“just as you did it to one of the least of these who are members of my family, you did it to me”); here’s something from the middle. John the Baptist sends his disciples, worried about Jesus’ strange politics, and Jesus replies, “From the days of John the Baptist until now the kingdom of heaven has suffered violence, and the violent take it by force” (Matt 11:12). Jesus tells us point blank that the politics of his kingdom center on suffering violence.

And to understand the human politics based on division, we might ask why Jesus resorts to implying that Peter is on the side of Satan? Just before this section on parables, both spoken Matt 13) and acted out (Matt 14-16), the Pharisees accuse Jesus of being on the side of Beelzebul, one of Satan’s agents. Jesus replies, “Every kingdom divided against itself is laid waste, and no city or house divided against itself will stand. If Satan casts out Satan, he is divided against himself; how then will his kingdom stand?” (Matt 12:25-26). Jesus is not just denying here that he is on the side of Satan; he’s also implying that the Pharisees are the ones on the side of Satan — just like Peter in today’s passage. Why? Because they are trapped in a politics of division. And it’s not just the Pharisees and Peter. It’s all human thinking on politics being trapped in Us vs. Them. Jesus names this as satanic. Remember the temptation scene early in the Gospel, when Satan shows Jesus all the kingdoms of the world? “All these I will give you,” Satan says to Jesus, “if you will fall down and worship me.” All the kingdoms of the world are Satan’s precisely in the sense of being trapped in politics of division, which rely on violence to maintain those divisions.

The only ultimate way to break that power of violence and division is to suffer violence at the hands of it. Jesus himself lived out this different faith and politics by in fact suffering the violence of his enemies on the cross — and was vindicated by God raising him on third day. Easter is the establishment of a new politics based on love and nonviolence, which is here to stay.

The Brief History of Suffering Violence as Politics
Early in the history of the church, this politics was practiced. The apostles were all eventually martyred. They suffered violence in the name of the living God of Jesus the Messiah. Many of the early Christians of the first couple centuries followed suit. But when the Roman Empire finally gave in to the Christians in the third century and formed an alliance with the church, this shocking politics of suffering violence gradually went underground . . . way underground.

It’s one of the ironies of history, then — perhaps an instance of divine ironic humor — that God uses a Hindu man to first take Jesus’s politics seriously on the scale of a mass movement. Mahatma Gandhi uses the politics of suffering violence against the ‘Christian’ empire of Great Britain. Gandhi talked about praying the Beatitudes every day and putting the Sermon on the Mount at the center of practicing his own Hindu faith.

I conclude, then, with a story about Gandhi fighting apartheid in South Africa (from the 1982 movie Gandhi), before he went home to India. Trying to explain to his fellow oppressed Indians who want to fight the unjust laws with violence, there come outcries from the crowd promising violent resistance, ending with: “For that cause I would be willing to die!” To which Gandhi responds:

I praise such courage. I need such courage, because in this cause I, too, am prepared to die. But, my friend, there is no cause for which I am prepared to kill. Whatever they do to us, we will attack no one, kill no one. But we will not give our fingerprints, not one of us. They will imprison us, they will fine us, they will seize our possessions. But they cannot take away our self-respect if we do not give it to them.

One from the crowd interjects: “Have you ever been to prison? They beat us and torture us. . . .” Gandhi continues:

I am asking you to fight. To fight against their anger, not to provoke it. We will not strike a blow. But we will receive them. And through our pain we will make them see their injustice. And it will hurt, as all fighting hurts. But we cannot lose. We cannot. They may torture my body, break my bones, even kill me. Then, they have my dead body. Not my obedience. We are Hindu and Muslim, children of God, each one of us.

Suffering violence seeks to awaken the most human part in all of us that we might see one another as brothers and sisters. Even with examples over the last century, including our own Civil Rights Movement, the politics of suffering violence remains shocking to us. Next week, we will conclude our series on Jesus’ politics by asking, “How Is Suffering Violence ‘Good News’?”