Many see Matthew’s Gospel as the most violent. He uses the phrase “where there will be a weeping and gnashing of teeth” six times, for example. (Luke uses it once in a text they share from Q.) I believe, however, that a case can be made for Matthew drawing the sharpest contrast between the violence of human kingdoms and the nonviolence of the “kingdom of heaven.” Not flinching from portraying a violent humanity is why there’s so much violence in Matthew.

René Girard was often criticized, too, for talking so much about violence. But he did so as part of a dual revelation he saw in the Judeo-Christian scriptures: a humanity hopelessly trapped in its own violence (anthropology) except for the nonviolent God revealed in Jesus the Messiah acting to save us from it (theology). No doubt my being a student of Girard plays a role in my reading of Matthew in the way I do. But I think I make the case for this reading in the many webpages of Year A.

I won’t address specific troubling passages here; I comment on many of them when they arise in the lectionary. I would like to sketch out the positive case for this thesis, especially in terms of what I think is Matthew’s overarching interpretive scripture, namely, the coming of the “Son of Man” in Daniel 7. The latter epitomizes the contrast I believe Matthew to be laying bare: the beastly violence of typical human empires versus the peaceful justice of the True Human Being.

Matthew begins his story of Jesus with this contrast: the birth of a new king in the city of David and Herod’s slaughter of the innocents. The new king begins his ministry by declaring blessedness for the victims of violent human empires — the poor in spirit, the mourning, the gentle, the pure in heart, the merciful, seekers of justice and peace, and the persecuted. He then lays out: the fulfillment of the law in love, even of enemies; nonanxiousness in the face of typical human scarcity-thinking; refraining from judgmentalism; treating all others with respect (“Do unto others. . . .”) — in short, the Way to be truly human in the face of beastly imperial oppression.

When Jesus’s cousin John sends disciples to understand Jesus’ brand of discipleship, I believe that Matthew’s Jesus is straightforward on the issue of violence: “From the days of John the Baptist until now the kingdom of heaven has purposely suffered violence (biazetai, middle voice), and the violent take it by force” (Matt 11:12) — the only appearance of biazomai, “using violence or force,” in the New Testament (except for Luke’s very different version of the saying in Luke 16:16). I add the word “purposely” to translate the middle voice of the verb. (See Advent 3A for more on this verse and my translation.) At the heart of human empires is inflicting violence and using force; the kingdom of heaven must therefore be about choosing to suffer the violence in order to reveal it as such. Human empires are structured on divisions of Us vs. Them; the kingdom of heaven suffers such divisive expulsion of the Other through the crucified Messiah, as the first step of bringing healing and forgiveness and launching community structured on only Us.

Matthew’s Jesus does place a lot of responsibility for violent empires on the political leaders. I’ve already mentioned Herod’s villainy in the nativity narrative. The Gospel winds down portraying a relentless confrontation with the various Jewish leaders: a series of engagements and parables of judgement in Matthew 21:23 through 22:46; an entire chapter of woes against them in Matthew 23; and the final confrontation in the trial before the Sanhedrin. There, Jesus climaxes Matthew’s portrait of him by emphasizing Jesus role as the fulfillment of Hebrew prophecy — especially as the fulfillment of the “Son of Man” prophecy in Daniel 7. To the High Priest’s question about his Messiahship, Jesus responds, “You have said so. But I tell you, From now on you will see the Son of Man seated at the right hand of Power and coming on the clouds of heaven” (Matt 26:64). “From now on.” Present action continuing into the future. The “Son of Man,” the New Human Being, has arrived, launching the kingdom of heaven.

(1) Matthew follows Mark in placing the final emphasis of Jesus’ ministry on his role as a prophet, especially since the series of prophecies in Mark 13 climaxes with the coming of the Son of Man:

(2) Matthew follows these prophecies with a series of parables/sayings that underscore the urgency of being ready, beginning with Mark’s parable, but then adding some Q material that he shares with Luke and several of his own:

(3) Matthew’s special material (no parallels): the Prophecy of the Son of Man Judging the Nations — Matthew 25:31-46 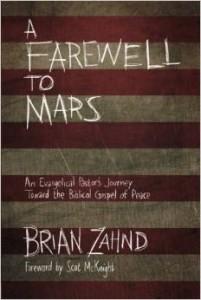 I have come to experience this last passage as Matthew’s greatest contribution to the Gospels’ portraits of Jesus, but only after encountering Brian Zahnd‘s reading of it in chapter 7, “Clouds, Christ, and Kingdom Come,” of A Farewell to Mars. This passage has deservedly been well-known and well-loved through the centuries, but in recent generations (or longer) as a parable about individuals being judged in the afterlife by the measure of their charitability. Zahnd reads it as a game-changing prophecy about judgment on the nations in history. Charitability is more a trait of individuals than nations; so when framing it as judging nations, it is a judgment on their collective actions to make central the needs of the marginalized — to center those on the margins. In short, it is a judgment on each nation’s politics and economics. I agree. Read more about Zahnd’s reading at Christ the King A.

I hope I’ve made a case for Matthew 24-25 as climaxing Matthew’s main thesis of contrasting human violence with divine nonviolence, through a game-changing prophecy of the New Human Being (“Son of Man”) leading humankind into a new Way of being human.